The bald head has finally experienced the feel of fresh air!

It took being at the top of the Sugar Loaf hill in Wales with no-one else around other than the hospital consultant friend who dragged me up there yesterday. And I quickly put my hat back on when we saw people coming up behind us. But I still did it. The photographic proof is here for all to see. 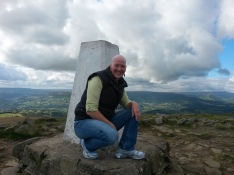 The fact that this friend is a doctor* is relevant. I reckoned if anything happened – such as me collapsing en route – I’d be in good hands. Also, even if I had doubts about doing a two-hour hike, I reckoned if she had sufficient faith I’d manage it, then I’d be ok. And I was. And it was the kind of day that makes you glad you’re alive, cancer or no cancer. Once again on this blog, I am moved to say you know who you are, and thanks.

So now I have a choice when I leave the house: wear the wig, go bare-headed or wear any one of the half dozen items of “chemotherapy headwear” I now own. Whereas a wig completely disguises the fact you have cancer and have lost your hair, the other two options do just the opposite. They’re the equivalent of you proclaiming: “OK, I’ve lost my hair cos I’ve got cancer, but so what.” Or as my husband has just put it: “It’s an obvious sign you’re more involved in confronting the inevitability of death than the rest of us.” There’s nothing like saying it like it is, hon! For the foreseeable future, however, I’m pretty sure I’ll stick to the wig.

The great Sugar Loaf uncovering lasted less than a minute. Until then, I’d only gone commando – as it were – in the house. On being bald, I can tell you that:

And did I mention your head’s cold? No wonder so many bald guys wear caps in weather the rest of us have/had no problem with. Respect, chaps!