Lots has already been written about what to say and what not to say to people who’ve got or who’ve had cancer. As for me, now that I’ve had a chance to think about it, I know there are certain phrases that I myself may have used in the past that I will never use again in any circumstances – except perhaps as a joke.

I’m aware I’m probably more sensitive to things like this now, and I know we often say things with the best of intentions, but I’m banishing the following from my vocabulary from here on in:

It’s obvious why we say phrases such as these. We have a need to try and rationalise things that happen to us that we weren’t expecting and that frighten us. Or we want to say something to reassure either ourselves or the people we’re talking to. Or we’re embarrassed and we feel words are better than silence. We mean well. Nonetheless, I won’t be saying these particular phrases again. I don’t think my vocabulary will be any the poorer for it.

*I do in fact know someone who was hit by a bus. She’s a very good friend and was on her bike at the time. Many years later she still has a dent on her chin from the encounter!

**If I had any say in the matter, I think I’d choose to die the way my 94-year-old mother-in-law died just this weekend… of old age, peacefully, in the company of loved ones. Lilian was an important and lovely part of our lives; we’ll miss her.

I decided I’d had enough of compression bras when I was getting dressed one morning about a month ago.

I’d been advised a good few months ago now to wear a compression bra as a matter of course to deal with the breast lymphoedema I’d developed as a result of my breast cancer treatment. I’d been very compliant… up until this particular morning. The sun was shining. It was a lovely day. I’d tried on at least half a dozen summer tops and still hadn’t found one that covered the monstrosity I was wearing. I looked in mounting frustration at the growing pile of discarded tops on the bed and thought sod it, it’s summer. I ripped the offending garment off, put on a normal bra and happily put on the top of my choice. It sounds pathetic but I can’t begin to tell you how good it felt.

So how does the lymphoedema manifest itself? I clearly have a mild case but things are a little swollen in and around the operated area on the right hand side. Andy insists you don’t notice it when I’m clothed. I think you can, but I’m probably paranoid. I pointed it out to Andy in a photo. He peered hard. “If someone was looking at you that closely,” he joked, “I’d have to hit him.”

I don’t know whether it’s down to the surgery (mastectomy, reconstruction and lymph node clearance) or the lymphoedema but there’s still general discomfort and tenderness in the whole area and occasional pain. I’ve stopped running for trains on the tube to avoid bumping into anyone as I dive into a carriage. I don’t run down stairs for fear of tripping or falling. I’m careful in crowds. I brace myself when people give me a hug and hold myself in such a way that when they do they avoid the affected area.

I’m keeping up with my daily lymphatic drainage routine. The compression bra (or heavy duty sports bra – they do the same thing) still gets worn with some regularity. I haven’t managed to get

to grips yet with the kinesiology tape, which is also used in the treatment of lymphoedema. Yes, that’s me with the tape on in the photo, when I was having daily manual lymphatic drainage at the clinic back in May (Post-op progress report No 5). Drawing by Andy.

When I met the consultant who assessed the extent of my condition in April, she asked me to go through my recent medical history with her. As I told her what treatment I’d had, I could see her mentally ticking lymphoedema risk factor boxes. 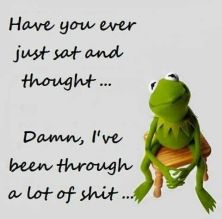 Anyway, I guess it’s just something I have to get used to living with. It’s manageable, if inconvenient and a bit of a pain. Importantly, it seems to be pretty much under control. Let’s hope it stays that way.