That was a fabulous weekend – despite there being a stonking big breast cancer reality check at the end of it.

On Friday I went ahead and started my sixth monthly treatment cycle for the secondary breast cancer with which I was diagnosed in April. A mix-up with bloods meant it didn’t happen the previous day as planned. According to the blood test results, things are still looking good. For that, I am incredibly thankful.

The following day was our older son Jamie’s 21st birthday. It was the loveliest of occasions.

The two boys came back from uni and my brother Peter, who is also Jamie’s godfather, came down from Glasgow. He brought my mum with him. Finally, my two adult nieces – the boys’ cousins – who live in London (and who very sweetly call me their London mum) were also there, with the boyfriend of one of them. We went bowling!

Since I was diagnosed with this treatable but ultimately incurable illness in April this year, milestones have even more special significance than they ordinarily would have.

At this one, there was a sense of calm and wellbeing with lots of joy, affection, love and laughs… and, of course, cake.

Then on Sunday, the next day, the two cycling clubs I ride with – BellaVelo CC and Balham CC – joined together for a 100 kilometre bike ride in my honour and to raise funds for research into secondary breast cancer.

Up to 90 of us, including my brother Peter, rode out through Surrey in different pace groups and then all met up in a coffee shop back in London at the end.

The Balham club has a nice write-up and more photos of it here. The charity we raised funds for is called One More City.

It wasn’t until I saw the photos that I realised quite how many colours I was combining on the ride. I decided it would be fun – and appropriate – to wear both clubs’ kit and then, with the gloves, I added a touch of “breast cancer pink” to mark the fact that we were doing this in October, breast cancer awareness month.

The debate over the whole pink thing is quite polarised. In my case, I don’t mind the use of the colour but I do object to the use of “fun” props such as inflatable boobs and pink wigs, pink boas, pink tutus and the like. I get the fact that people want to make public displays of support and/or need an outlet for their own fears or other feelings but I find a lot of it quite tasteless. I think it trivialises, infantilises and sexualises this killer disease.

Now we’ve got the feminist speech out of the way, let’s get back to Sunday’s ride. The two-club kit combo was bright enough but I hadn’t taken into account the bike and water bottle. That took the whole colour thing to another level!

The bright colours were appropriate, though, as they kind of reflected my mood. I was quite overwhelmed that some 90 people had signed up to do this event. I was definitely feeling the love. The support and sentiment that led to this ride taking place meant a great deal to me on a personal level and on top of that it was great to get these two lovely clubs together. I’m extremely grateful to everyone who helped organise and took part in the ride and/or have supported the One More City charity.

Relaxing on the sofa on Sunday evening with a glass of white wine, I reflected on what a lovely few days it had been. Treatment had gone ahead and both the birthday celebrations and the bike ride had gone really well. It had all been very special.

Then I read on Twitter of the death from secondary breast cancer of Deborah Orr, a huge character and well-known personality from the world of journalism. At 57, Deborah was just slightly older than me; she was also a Glaswegian. Chillingly, she died just months after receiving her secondary diagnosis. She was clearly very ill, but her death came as a shock, at least to me. I suddenly felt terribly sad.

Right there on the sofa, I raised a glass to Deborah and felt even more grateful for the weekend I’d just had.

I should have been in my local hospital in south London this afternoon having my sixth monthly cycle of treatment for the secondary breast cancer with which I was diagnosed in April. Instead I was sitting round the corner on the high street having fish and chips in a great little chippie.

Why? Because the hospital has seemingly lost the blood I had taken shortly after 0800 this morning for testing to see whether I was OK to go ahead with treatment this afternoon. I had a second lot of bloods taken early this afternoon and my treatment appointment has been rescheduled for 1100 tomorrow. I’ll hear from the hospital this evening only if the results mean I can’t have treatment.

Thus the fish and chips. Comfort food was needed to calm me down.

I’m over it now but at the time I was both frustrated and upset and I’m afraid I was initially less than polite with the poor registrar who saw me and had to try and work out what on earth was going on. I hope I caught myself in time; I have also since apologised.

It didn’t help that while I was waiting to be seen, I’d to listen to the inanity that is Loose Women, which was on in the TV in the waiting room. Among the topics for discussion on the chat show was whether it’s ok to dump your hairdresser. I swear I heard someone say it was easier to cheat on your partner. I’m sorry, but ffs.

You psyche yourself up massively for these appointments. What will the blood test results show? Will my tumour markers be up? If so, what might that mean? Will we go ahead with the next cycle of treatment or not? To be fair, this is the first time anything like this has happened. Everyone was very apologetic and keen that the alternative arrangements were as convenient for me as they could be.

They say you shouldn’t sweat the small stuff. Was this small stuff? In the grand scheme of things it was, but for a while it felt like big stuff to me.

I just got back last night from a short cycling holiday in Spain and I had today and tomorrow – and indeed this coming weekend – meticulously planned. It’s our older son’s 21st birthday on Saturday and we’re having a small family gathering that evening. On my list for tomorrow was to spend a couple of hours’ gardening (the garden’s a mess), buy helium balloons and party accessories, buy food and cook for Saturday, get some photos printed, sort out a present and, oh yes, meet my mum, who has dementia, off the train from Glasgow at Euston at 1600 and bring her and a bike (my brother’s bike, not my mum’s!) back to the house. Thankfully my brother will be there to help me get get my mum and the bike – and me – into a taxi.

On treatment days, I’m usually at the hospital for a couple of hours. On those days, I generally do nothing other than have treatment and relax around the house. Treatment’s generally not painful but it’s not an easy day. I have one drug administered as two injections, one in each buttock, each of which takes a couple of minutes to administer. I also have an infusion (as you do with chemo) of a bone-strengthening drug – that’s usually over and done in half an hour. The oncology nurses are incredibly caring and careful doing the injections and finding a good vein into which to insert the cannula for the infusion. But while generally none of it is painful, it’s certainly not pleasant.

Usually I have bloods done one day then see the consultant the following day with a view to having treatment later that same day. Ironically, this time round, the consultant had very accommodatingIy arranged for me to have everything done on the same day. This was so I could go on the cycling trip. I came back late last night and went down to the hospital first thing this morning to have blood taken so the results would be ready for my appointment with the consultant (or in the event with the registrar) a few hours later. Luckily I live close to the hospital and can easily get there and back.

There’s plenty of good news. I feel incredibly fit and well. Not only am I doing lots of cycling, I’m also running and I’m even playing tennis again. Back when I was diagnosed, I really thought my running and tennis days were over. On the cycling front, I’m incredibly touched that the two clubs I ride with are organising a joint 100k ride this coming Sunday (half way through Breast Cancer Awareness Month) to raise money for research into secondary breast cancer. 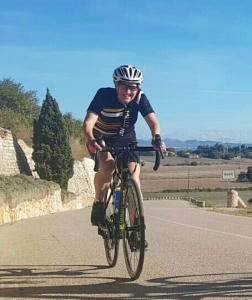 The cycling holiday, organised by a company called Mellow Jersey, was fabulous. The feeling I had hurtling downhill on my bike at almost 60 kilometres an hour will take some beating. As will the feeling of triumph at the top of a steady climb of around eight kilometres. I was by far the slowest in my group on the hills, but someone has to be last and really I was happy just to be there. When I was first diagnosed, I had no idea whether I’d be in a position to do something like this ever again. Cycling more than 300 kilometres over four consecutive days would have been inconceivable just a few months ago.

But where’s my blood? I know big institutions can’t be totally efficient but you have to wonder where the two vials of blood are that I had taken this morning. They have to be physically somewhere. The department that took them said they were delivered to the lab but the lab claimed to have no trace of them. Like lots of lost things, they’ll probably turn up and, in this case, we’ll end up with two lots of results on the system.

As for me now, I’m off to do some of the many, many things I had planned to do tomorrow. Hopefully I won’t hear from the hospital this evening and treatment will go ahead tomorrow, we’ll all have a lovely time with the birthday boy on Saturday evening, and we’ll have a great bike ride on Sunday.