In the grand scheme of things, I’m quite relieved at the results of my latest round of blood tests.

I met the oncologist earlier this week to discuss the results of the tests I’d had done the previous day. The best I could have hoped for was for my tumour marker to have stayed at the level it had jumped to in December. I figured that was unlikely given that it had risen by a whopping 20% between the November and December blood tests. In the event, it went up by around another 10%.

On the upside, on the blood front things are good. The secondary breast cancer that has spread to my bones has also infiltrated my bone marrow and so reduces my body’s ability to make healthy blood. It was therefore good to hear that my haemoglobin count is up from last month and is again within the normal range, albeit at the very lower end. My neutrophils, while still below the normal range (they’ll never be there again), are 40% up on last month. That means I’m a little better placed to face any infection that comes my way – a positive in the current climate.

Once again, it’s swings and roundabouts. The tumour marker is up but bloods are ok.

With the pandemic still on the rampage, every effort is being made to minimise the number of trips patients on treatment make to hospital. For example, every other appointment with the consultant over the past nine months has been on the phone rather than in person. In fact, I may have had more over the phone than not. Some people don’t like this way of communicating but it’s fine by me. In addition, for my next two rounds of treatment, I’m going to self-inject at home the bone strengthening drug (denosumab/Xgeva) that I have at the start of every new cycle. It’s usually done by one of the oncology nurses at the day treatment unit at the hospital. I did it myself last month at the unit under supervision and that too was fine.

The fact that the marker is going up indicates that there is increased cancer activity somewhere in my body. That’s what happens with secondary cancer. It eventually outwits every possibly treatment. While these latest results were far from disastrous, you do have to be practical. The oncologist therefore discussed with me what drug(s) I might move onto if the scans I’m to have in seven weeks show signs that the cancer has progressed to the extent that we need to change to another treatment. The scans could show any number of things. While you can’t predict a precise course of action in advance as you don’t know what you’ll see, you can be thinking of what might need to happen under various scenarios.

The discussion was quite sobering. But let’s not pre-empt things. That decision – if indeed a decision needs to be taken – is eight weeks away. In the meantime, I carry on with my current treatment and just get on with things.

One of those things is reporting my health status daily on the Covid Symptom Study app – covid.joinzoe.com – that is used to study the symptoms of COVID-19 and track the spread of this virus that is causing such devastation and unimaginable heartache to so many. (On a personal level, next week will see the funeral of a good friend’s husband who died from COVID-19 just after Christmas. His death was heartbreaking on many levels.)

It seems heartless to carry on writing about my own experiences having just written those previous two sentences, but the case is that I reported having a runny nose on the Zoe app, as it’s known, one day last week. While a runny nose is not a symptom of infection with the virus, I, together with any other household members, was “invited” via the app to take a test. It was all very efficient. The test kits were delivered the day after we requested them, we posted them back the following day and got the results – negative in the case of both myself and my husband – 36 hours later via text and email.

I reckoned the results would be negative but, with transmission rates as high as they are, you can obviously never be sure. Our two boys are back at uni and so it’s just my husband and me in the house. I work from home so it’s been a few weeks since I’ve been out for anything other than to exercise or attend hospital appointments. In my husband’s case, it’s for exercise or shopping. I now exercise on my own; I’ve even stopped the walks with friends that had become such a regular and welcome feature of life.

I’m feeling well on the whole and another thing that I’m doing now that I don’t meet up with friends for walks is go out almost every day either for a run or a bike ride. The reason is that I have signed up to a bit of a mad challenge that involves running and/or cycling a total of 192 miles between the beginning of January and the end of March. I could do it all on the bike but I’ve decided to do as much of it as I can on my own two feet rather than on two wheels. Running is so much more challenging than cycling, at least it is for me given the pace at which I cycle. I run incredibly slowly but I guess it still counts as running in that I do overtake people who are simply walking!

There’s no way I’d be running if a friend hadn’t suggested we both sign up for this challenge. Even after having signed up, I’ve had to come up with an incentive to get me out running. I wanted to listen to Transmissions, a multi-episode podcast that I’d heard was really good – about the iconic Manchester bands from the 1980s, Joy Division and New Order. I decided I would only listen to the podcast while running. It was a good plan and it works both ways. I’m loving the podcast so much that I go out running so I can listen to another episode and listening to the podcast makes the runs easier.

This has been a good week for running.

I’ve got the week off work, so I’ve got no excuse really. I’m in the category of people for whom work has never been busier and I worked part, if not all, of each of the four working days between December 24th and 31st. It has been so relaxing to have a big chunk of time off. The house is very quiet now that the boys are away again. We had a lovely Christmas together. It’s usually just the four of us anyway on Christmas Day so in that sense at least it wasn’t so different from other years.

The photo above on the left is of me on the 25th, relaxing on the sofa with two of my presents after an almost two-hour spin on the bike – out to Richmond Park, a favourite destination around seven miles away. 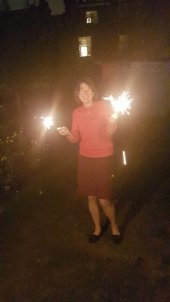 The photo on the right was taken in our garden by my husband not long after the bells on New Year’s Eve.

Hogmanay, as we Scots say, normally makes me feel quite melancholic. This year, though, presumably because of all the sadness that 2020 held, it felt important to celebrate and look forward – both because of and despite what the future may bring.