Now that my hair has started to grow back post chemo, I can’t wait to ditch my wig.

Since my operation in December I’ve been wearing the wig less and less and now I’m looking forward to the day when, instead of transferring it from my head on to the mannequin’s head where it rests when I’m not wearing it, I assign it to the back of a drawer. It’ll likely be another couple of months, though, before that actually happens.

The wig took some getting used to when I first started wearing it (Learning to live with a wig), but I soon grew to love it. It was liberating. I could throw it on, give it a quick brush and I’d be ready to leave the house. Nobody – other than those I’d told – would know I had cancer. With a wig, I could pretend things were normal. I felt I was in control.

Now, nearly eight months after my diagnosis, seven months after my first chemo session and more than two months after my last, I’m getting a little tired of pretending. More than that, I no longer feel I need to pretend. I’ve long since come to terms with the fact that things are not normal. My breast cancer is now part of who I am and, rather than embrace the wig, I’m starting actively to dislike it. If I’ve been wearing it out – and I do that less and less – I whip it off as soon as I get back home.

My operation on 19 December was the turning point. I could hardly move for three days after the op and disguising my bald head was the last thing on my mind. I didn’t care who saw me bald – I had more important things to think about (Feeling a million times better than this morning, but what a struggle) – and I didn’t wear the wig for the five days I was in the hospital. I never wore the wig at home anyway, except when people visited, so when I came back from hospital and was essentially housebound for a couple of weeks, before I knew it three weeks had gone by with me having worn it only a couple of times. After that it seemed strange putting it on at all.

Since the death of my dad* almost four weeks ago (In Glasgow again, but for the saddest of reasons), I’ve spent a lot of time indoors in Glasgow in the company of close relatives. I didn’t really wear the wig much there either. And those times I did wear it, it inevitably ended up being passed around for all and sundry to try on!

Back home in south London, it used to be that if someone came to visit or knocked at the door, I’d rush to put the wig on. Now I just throw on a beanie hat… or if one isn’t handy, I don’t bother. The window cleaner, delivery men, the electricity meter reader… they’ve all seen me bald, and of course haven’t batted an eyelid. And if I go out for short periods locally – driving the boys to school, popping to the shops, going for a walk on the common or going round to a friend’s house – I just pop on a hat and go. It’s only when I go out for more prolonged periods that I wear the wig.

At this stage, I have a layer of hair on my head that’s around a quarter of an inch long. It looks ok, if you like the Sinead O’Connor look. It’s very, very soft, like a baby’s hair. I’ve been told it’ll soon go fuzzy or wiry and at that point you get it cut and it then grows in thicker. It’s VERY grey, although there’s also some near black in there as well. I don’t remember my hair being that dark. That said, I’d been colouring and/or highlighting it for so long that I’ve forgotten what colour it was originally. My eyelashes and eyebrows have also grown back, the latter really thickly.

When I’ve seen women in the past with hair like mine, I’ve always thought “Oh, there’s someone with cancer”. I now realise it’s more accurate to think that it’s someone who’s had, rather than got, cancer. By the time your hair’s that length, you’re through the chemo and probably also most of the rest of your treatment.

I’ll spend the next few weeks – or perhaps months depending on how it goes – deciding on such things as how to have my new hair styled and whether to have it coloured or leave it grey. 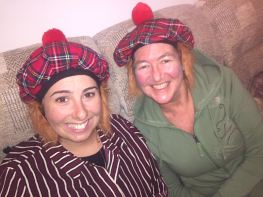 There are other questions to consider, too. What do you do when you go back to work? It could be a bit embarrassing to go from wearing a wig one day to sporting your original hair the next. And what if the wig really is nicer than your own hair?!

I still have plenty of time to think about it all. In the meantime, my niece Shereen has come up with a novel, ultra-Glaswegian alternative to the wig. Very becoming, don’t you think?

*I have a story about my dad and the wig, from my visit to Glasgow last November (I love Glasgow, but it’s not Geneva). I’d got up one morning and it simply did not occur to me to put on the wig or any other head covering. I was happily having breakfast with my mum and dad in the flat they’d been living in for less than a year when I realised this was the first time they’d seen me bald. Bless them, they hadn’t said a word. I apologised for not warning them in advance and explained that I was used to going bareheaded at home, to which my dad replied: “That’s nice, because it means you must feel at home here too.” He was right, of course.